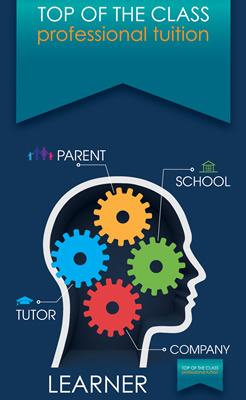 At Top of the Class, we work together with your tutor, your child, your school and yourself to form a network of support to make sure that your child gets the best from their learning.

Share our excitement for learning with this inspirational video about the importance of education.

Secrets of successful learning revealed; how to ensure that our children achieve their full potential for excellence.

How to prepare your child to get the best results from their new private home tutor. Learn More.

How to ensure that your child gets the VIP treatment at school. Learn More

What is your child's strongest learning style? Learn More

Our tutors work in sync with your child's school curriculum to help them get more out of their learning. Learn More

Why one-on-one home tutoring is most effective. Learn More

One of the most fundamental differences between humans and other species is our ability to learn.  Yet the thing that separates those who learn really well from those who don’t, is not the ability so much as it is the desire. Irrespective of intelligence, when we have a desire to learn, very few things will get in our way.

So what is it therefore that drives a child’s desire to learn more about things that will help them achieve all the success in life we want them to have?

Trying to escape negative consequences of not learning is hugely ineffective. So punishing a student for not putting in enough effort is not the answer. The feeling of accomplishment a student receives when they do well can help them feel motivated to work hard, so reward systems can be of some benefit at least.

Take the carrot and stick out of the equation completely however, and realise that there is a far more powerful force that fuels the desire to learn that we often overlook. That force is of course, a child’s natural curiosity.

The Death of Curiosity

Curiosity in children is not something that really develops like other thinking skills do. Rather, children are naturally curious from a young age to learn about the world around them. Curiosity doesn’t naturally decline after early child development. Rather, it tends to be like a flame that is gradually extinguished.

Imagine the following scenario that typifies how children develop and then lose their curiosity: Teacher says its time to pay attention to the times tables written on the board. The student’s attention however is captured by the fish swimming around in the classroom fish tank. Their natural curiosity starts asking a question inside their mind: “I wonder how do fish breathe under water?” Suddenly,the teacher then scolds the student for not paying attention to what they’re ‘supposed’ to be focusing on. The student silences that question inside their mind.

With enough repetition throughout early child development, the message a young mind receives is that their curiosity is bad, so eventually, their desire to learn becomes is extinguished.  They may go on following instructions and doing as they’re ‘supposed’ to do, but their desire blows away in the wind as something they’re ‘not supposed to do’.

“I think, at a child’s birth, if a mother could ask a fairy godmother to endow it with the most useful gift, that gift should be curiosity.” – Eleanor Roosevelt

Unfortunately, curiosity does not come with a switch that we can just turn on and off when we’re ‘supposed to’. It’s tends to go hand in hand with impulsivity and spontaneity. You can’t just say: “okay it’s Monday 9am, time for my curiosity to spark up again.”

Think about it – how often have you found that the most creative and brilliant ideas you have just pop into your mind when you’re in the middle of having a shower, driving to work, or doing something else that you’re “supposed to be doing.”

The unfortunate reality however is that we can’t just go around following our curiosity whenever we want – that’s not the way the world works. We still need to have structure, routine and rules about what to do and when to do it for our society to function.

The decline in childrens curiosity is an unfortunate yet unavoidable side effect of the structured way that the world works. Having said that, it doesn’t need to be killed off all together. It is possible to achieve a healthy balance, so that our kids learn to be disciplined and organised whilst still kindling the fire that drives them to want to learn more.

5 Steps To Rescue Your Child's Curiosity

So here are five practical tips for parents and teachers to help keep the spark alive:

1.     ENGAGE WITH THEM WHEN THEY’RE READY: When kids come to you to ask you questions about something they want to know more about, take the time to make yourself available and engage with them in the moment where possible.  Allowing yourself to be a bit impulsive and spontaneous from time to time will add more fuel to the fire than anything else!

2.     DON’T EXTINGUISH THE FLAME: If your child starts coming to you for answers at a time where you can’t realistically engage with them, then at least do no harm. Acknowledge and praise their curiosity and remember to come back to it later. For example: “That’s a good question. You think about the answer and I look forward to talking with you about it tonight at dinner okay?”  This will at least keep the flame alive. On the other hand: “I don’t know, it doesn’t matter, there are more important things to be thinking about right now.” This is a sure fire curiosity killer.

3.     SHOW INTEREST IN THEIR INTERESTS: If they’re not interested in the things you wish they were interested in, then at least try to show an interest in the things they do find fascinating and expand from there gradually without pressure. This is a strategy our tutors use successfully to make their lessons more relevant and engaging for their students.

4.     MODEL CURISOSITY: If we don’t have something we are truly passionate about or feel fascinated to learn more about, then it’s not realistic to expect our kids to do the same. That's not how children develop. So show your child that you you’re your own areas of interest that you love learning about.

5.     INTERESTING AND IMPORTANT: If you want them to develop interests in topics that will truly benefit there life (as opposed to unhelpful or destructive interests), then start develop a new curiosity in things that you find both interesting and important.  Consider however that there are few things more important than engaging with your child to help bring out their best!

The Other Side of the Curiosity Coin

But what about kids who are the opposite? You know, the ones full of curiosity, creativity and spontaneity, but have difficulty organising themselves, staying on task and maintaining a disciplined routine? After all, the goal here is to reach a healthy balance of structure and curiosity, rather than to nurture one so much that it comes at the expense of the other.

Well if you’re feeling curious to know what the children psychology books say about how to balance both sides of the coin, remember to find out how in next weeks article.

And if you found this article helpful, then others might too, so remember to share it and if you have not already done so, sign up for our weekly email newsletter below.

See you next week!

THE BEST PRIVATE TUTORs FOR THE BEST RESULTS in sydney

Cognition: What we think affects how we learn

Your child's private tutor will identify their strongest 'intelligences', establish their individual learning styles and adjust their teaching methods for the best results!

Your child's private tutor will use constructivist teaching methods to build new understanding step by step so that your child builds new knowledge with ease.

Your child's private home tutor will focus heavily on boosting their assessment scores by improving their exam taking and assignment competencies, as well as IT and literacy skills.

Emotion: How we feel affects what we learn.

Weaknesses are only those things which have yet to be strengthened. Your personal tutor will strategically discover and develop your child's strengths to overcome weakness.

To overcome the boredom barrier, your private home tutor will strategically appeal to your child's interests to make learning more engaging and personally relevant.

Through strategic goal setting and a strong focus on progress, expect to see your child's attitude shine and their motivation drive full steam ahead!

Reflective practice is an effective tool used to power efficient learning. Learning from ones mistakes however requires strategic conditioning and adaptation.

How TO PREPARE YOUR CHILD FOR THEIR NEW TUTOR

By the time parents come to us, their child may have been struggling with confidence, leaving parents feeling fustrated and helpless. To make sure you get the best from your child's tuition, it's important to know how to prepare them for a new private tutor, and how to avoid the most common mistakes. Know More...

The increasing importance of a good education

Your decision to hire a personal tutor in Sydney will secure your child’s future in an ever increasingly competitive world, where the bottleneck of success is always tightening. Know More...

the emotional impact on learning

Whether or not our children succeed with their schooling depends largely on emotional conditioning factors which affect feelings, thoughts and behaviour. We will show you how negative cycles begin and how to go about reversing them through tutoring, to create new confidence and passion towards learning! Know More...

WHAT TO LOOK FOR IN A GREAT TUTOR

Knowing what to look for when choosing a home tutor can be confusing. If we have no home tutors available when you contact us, the following article will help guide you when looking elsewhere. Know More...

What to do if you're unhappy with a teacher

Having problems with your child's teacher or principal? Does it ever feel as though your child is just another number in the system? Want to know how to get what you want from your childs school? Know More...

Before deciding whether it's best to send your child to a public (state) school or a private school, there are some important things to consider. Know More...

HOW TO TELL WHICH SCHOOL IS BEST?

Not sure which school is best to send your child to? There is one easy way to find out, and it might not be what you thought. Know More...

THE MOST IMPORTANT PART OF TEACHERS PREPARATION

Preparation forms the foundation of delivering successful outcomes with confidence. Whilst all good teachers know about the importance of preparing goals and good lesson plans; great teachers know that the most important part of a teacher's preparation is preparing a positive state of mind. Know More...